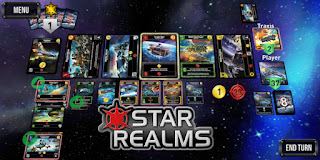 Do not confuse it with trading/collecting games like Hearthstone or Magic the Gathering.

In Star Realms both players play with a single card set. You can buy expansion cards but still they are added to the shared deck. During the game they select cards for their personal decks, deciding which from the available cards would work best for them.

I recommend buying a real one paper card version. Acquiring it you get a pocket deck with the value of a full board game to play with your friends.

If you buy the Frontiers version you get set for up to 4 players and bosses for single or cooperative play.

If you bought the base deck, you could print bosses cards and even play 3  and 4 players with different starting sets.

1.1. New World - The first mission is also the hardest to achieve 3 stars. Note that YOUR 7 turn is actually 13th turn, because the game counts your and AI turns separately. Anyway, focus on blobs with high attack cards like Ram or Blob Destroyer. The second shal remove trade federation cards that AI could buy to slow you. You require some luck so keep trying. At turn 9 start scrapping your ships for additional damage.

1.2. Challenge - There are two options. Kill your opponent fast, or try to control the game. Buy cards with high trade bases, drawing cards, and some that give you authority. If you reach the majority then your bases will protect you from damage and would destroy AI ones. Then do not kill your opponent until you slowly regain authority up to 25.

1.3. A Test Of Strength - Key point is to destroy Blob bases so they can not use ally ability. Buy Bases to protect yourself and note that you do not have to win to pass this stage. So even if you have a chance do not kill AI, so the game won’t turn too soon.

1.4. Distress Call - You can not use your starting bonus base, but it still virtually gives you 4 life as it is an outpost. Nevertheless you shall discard and scrap it just after Vipers and do not buy any other Trade Federation bases. Focus on trade so you can get large ships.

1.5. Payback - Stars must be gained separately. For the second run you must scrap Blobs and Federation cards that you start with.

21.1 Treason - Union cards are powerful themselves and give Blobs and Imperial ally abilities. You are overpowered so just follow star requirements.

26.2 MCCready’s Maneuver - This one is hard. Focus on docking your Imperial defender. It will trigger ally ability. Mobile Market is also good, scrap it each time it shows. Buy all Plague Pods so AI can not use them. Scrap them to destroy AI bases. When your life drops below 30 start scraping cards for damage.