The awesome turn based, old school, dungeon crawler with gorgeous graphics. Your target is to upgrade your gear by clearing dungeon rooms and finally challenge the dragon lair. And then to start over. You can play it on mobile by the browser page www.dungeoneers.com 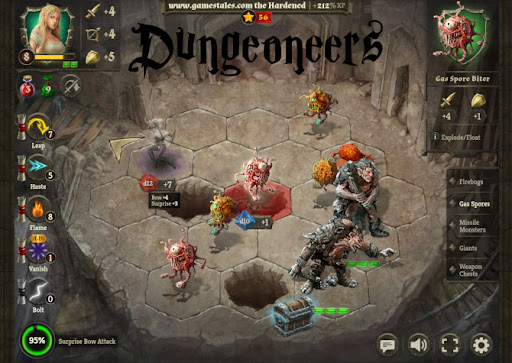 The plot looks repetitive, but we do  not feel it. The dragons will be stronger with each level, new features are unlocked, you will learn new tricks and your characters will get skills with the XP earned.

The small, five hex wide maps, and the “move or attack” system make the game highly exploitable. This is great fun actually. There will be situations where you need luck on dice - literally the dice are visible. And sometimes, with a good move you will be able to push all enemies into the pits without a roll. But a bad move will get you stunned, losing all your health potions till death.